Vienna/Rorschach 14th of January 2022 – QMware, developers of the full-stack & open standard global Quantum Cloud, today announced the opening of the first Hybrid Cloud Data Center Alpha. The launch of the new data center provides the IT sector with a groundbreaking Hybrid High Performance Quantum Computing Cloud Platform, the first of its kind for industrial use.

Quantum computing is widely expected to be a fundamental game changer for data centers in the 21st century. Seemingly intractable computation problems appear to occur on a daily basis. Issues with optimization are frequently cited, for instance, whether it be in logistics or manufacturing processes, the broad area of simulations of physical systems or even in machine learning and artificial intelligence. Such tasks can be overwhelming for classical computers, regardless of the amount of silicon chips that have been built in. Quantum computing holds the prospect of being the solution to many of these problems through the implementation of new kinds of algorithms – hybrid quantum algorithms.

The new computing paradigm we find ourselves in requires an innovative hybrid approach: high-performance classical computers merged with quantum processors, based on both physical & logical qubits, for the efficient processing of hybrid quantum algorithms. This is the quintessence of QMware’s technology, the virtualization of Quantum Processing Units (QPUs).

Launch Event & Press Conference
On 14th of January 2022 at 11am CET, the Federal Minister of Digital and Economic Affairs in Austria Margarete Schramböck inaugurates QMware’s Hybrid Quantum Cloud within the state-of-the-art NTT Data Center located in Vienna in Computerstrasse 4. The day is a remarkable milestone in Europe’s history of information technology, marking the first-time availability of an industrial grade Quantum Computing Cloud service.

George Gesek, CTO and co-founder of QMware, says: “It is my pleasure to be at the forefront of the development of the first Hybrid Quantum Computing Systems which are so powerful that the industry will enormously profit from them. What we have achieved is nothing less but a new industrial standard with the virtualization of quantum processors, which secures the investment of our clients from day one. Clearly spoken, any hybrid quantum computing application which will be built in the QMware Cloud will indefinitely run on all successors of QMware’s platform and any future universal quantum processor from 3rd parties, we integrate.”

Partnering with QMware
QMware’s Technology Alliance Partnership with its customers is founded in know-how transfer and IP security. With every QMware project, industry partners gain worthwhile insights into their current data and the ability to compute intensive applications. The intellectual property created during a QMware project always remains with the customer. QMware is also a trusted partner for the licensing of newly developed Quantum computing technologies and thus functions as a platform for the technological enablement of industrial verticals in their entirety.

Emancipating Europe’s Cloud
The information technology for cloud computing still vastly remains in the hands of California’s Silicon Valley. Europe is leading regulations about data security and governance, with the General Data Protection Regulation (GDPR), representing a hallmark across the global IT industry. However, Europe is still lagging behind with the implementation of its own highly developed technologies. QMware is challenging the status-quo by offering its novel hybrid quantum computing technology as a European alternative, while providing open interfaces and integration toolkits for market leaders in other commercial verticals according to the evolving European Cloud standard GAIA-X, the foundation for a federated, open data infrastructure based on European values.

Markus Pflitsch, CEO and co-founder of Terra Quantum and QMware, adds: “QMware is the unique promise to our customers to offer them easy access to GAIA-X compatible hybrid quantum cloud services in combination with leading-edge quantum algorithm design as well as quantum enabled artificial intelligence and machine learning techniques from Terra Quantum”. 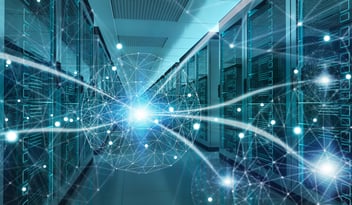